All of the success with the Groveport School District has helped the Insulation Professions of Ohio to review and research other area schools. The Johnstown-Monroe school district, located northeast of Columbus, is another school district that will be looking at completing construction in the coming months. With phase one of the renovations on the Johnstown-Monroe High School recently completed; phase two work will include plumbing, sewer, electrical, HVAC and lighting. The project will total $4.8 million dollars and is currently on time and under budget.

The benefits of mechanical insulation can also be applied to the Johnstown-Monroe school district as they look to build a new elementary school. The elementary school was approved in February by the board for a $16.36 million budget, with the school forecasted to be open and functioning for the 2017-2018 school year.  With the mechanical insulation promotion marketing pieces, the video, reference documents and supporting material, already established, the Insulation Professions of Ohio will be pushing to ensure that the Johnstown-Monroe school district buildings be completed with the safety and benefits that come with mechanical insulation.

‘The high hopes of the school district for this new construction project and our experience of the deterioration of mechanical systems in the old high school motivated us to do something to ensure quality mechanical insulation work would be done on the new high school,’ Scott Emrich with Insulation Professionals of Ohio said.

At first Dan Poteet, Manager of Insulation Professionals of Ohio, was adamant about securing the work at Groveport because he was worried that the design team would intentionally value engineer mechanical insulation out of the construction plans, but as the project progressed he began to realize that as the decision makers began to more thoroughly understand the value and benefits of mechanical insulation they were less apt to cut it from the project.

‘For a while we thought decision makers on major construction projects like this were deliberately value engineering mechanical insulation out of their construction budget, but the more we looked into to it, the more we realized that the exclusion of mechanical insulation from major construction projects was mostly due to end users’ ignorance of its existence and the benefits it could bring. It was more misunderstanding then malice,’ said Poteet.

The desire to help a local school district while organizing work were not the only motivation behind the mechanical insulation education campaign, Poteet and Emrich saw this as an opportunity to promote the entire industry more generally.

‘When Scott told me about what was going on in Groveport my wheels started turning. At first we just thought of it as a good opportunity to help a local school district and organize work, but after talking about it for a while, we started to think bigger and realized that this was a great opportunity to promote mechanical insulation and educate people about its existence and benefits on a larger scale,’ said Dan Poteet.

While Emrich and Poteet appreciated the Groveport opportunity as organizers and managers, they also saw the opportunity from a broader industry perspective.

‘We realized that if we only used Groveport to benefit our Local and not the entire industry, we would be wasting a golden opportunity,’ said Poteet.

IPO saw the Groveport school project as more than just a single large scale project that would keep their workforce busy, they saw it as an opportunity to make the value and benefits of mechanical insulation visible to other potential end users who did not know about its value and were therefore not planning to include it in the design of their construction projects.

‘Basically, we thought the Groveport Madison high school build would be a great test case for a mechanical insulation education campaign that we could take other places as well. We thought that if we could get in early, during the planning and design stages, we would be able to educate the school board and design teams about what mechanical insulation is, and all the ways their school building and district could benefit from it,’ said organizer Scott Emrich.

The response to the campaign continues to be favorable, and the design team has given provisional feedback indicating that they will implement mechanical insulation in the design and construction of the school.

In an ongoing effort to show support for the Groveport Madison school district, the Insulation Professionals of Ohio designed and hung a banner on the high school football field fence. 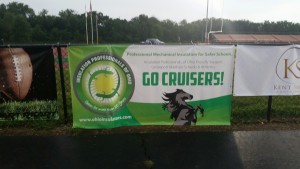 Over the last year, the Insulation Professionals of Ohio (IPO) have been working with members of the Groveport Madison school board to ensure that construction of the new Groveport Madison high school is properly mechanically insulated as well as safely firestopped.

IPO hopes that the banner shows the school board and teachers, as well as the district’s students and their parents how much IPO cares about the health and safety of the school district’s facilities, administration, teachers, and students. 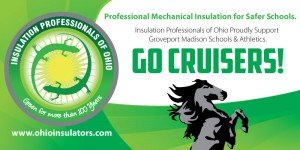 IPO is proud to sponsor Groveport Madison schools and athletics, and looks forward to continuing what is already a strong relationship.

Ladies and gentlemen, start your engines…for a good cause.

The 2nd Annual Breath of Life Foundation Drive or Ride will be held on Saturday, August 2 from noon-2 pm, followed by a group ride. This motorcycle rally and car show will help benefit the Breath of Life Foundation, which represents workers in the insulation field by aiming to prevent and cure mesothelioma and other asbestos related diseases through providing critical funding, monitoring, early detection and cutting-edge research at leading medical and academic institutions.

The cost is $30 for a single rider and $35 per couple, including a t-shirt for all participants. The event will include a 50/50 raffle, prizes, music, food and beverages, and, of course, lots of fun for all involved.

Set up your ride, and we will see you in Dayton! 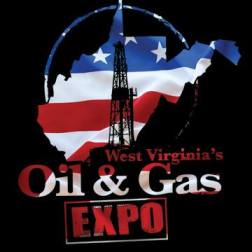 With prime location atop both the Utica and Marcellus shale formations, the small state of West Virginia has become one of the main focuses of domestic energy drilling and production.

The largest event of its kind in the state, the Expo brought together companies directly involved in Site Development, Exploration, Drilling, Hydraulic Fracturing, Midstream Services, and Site Restoration. Customers, contractors, vendors and energy companies gathered together to view new technologies and hear experts speak on the future of this expanding industry.

“West Virginia has been a major entity in domestic energy since the time the first coal mines were opened, and now the oil and gas industry is putting the hard-working, ambitious spirit of West Virginia back in the world’s spotlight,” says Expo Founder Damian Ferek on the Expo’s website. “As Marcellus Shale drilling gained footing, our goal became simple — to give the people of the industry a chance to see all aspects of the industry come together in one event.” 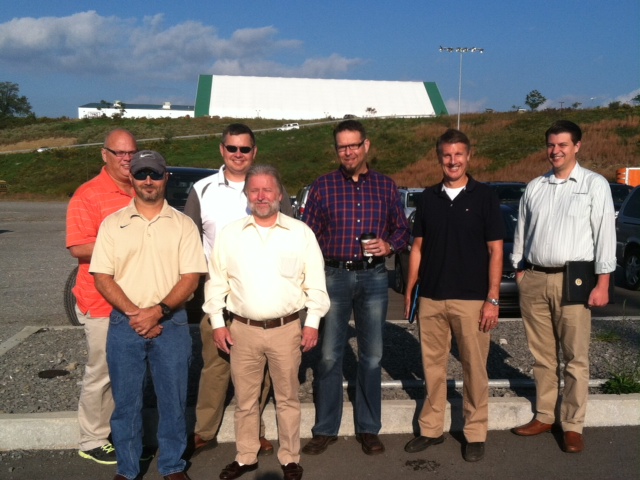 The Insulation Professionals of Ohio specializes in providing clients and contractors with the highest-skilled and best-trained workers in the industry, a fact that was clearly evident at the 2013 Heat and Frost Insulators Central States Master Apprenticeship Competition earlier this month. 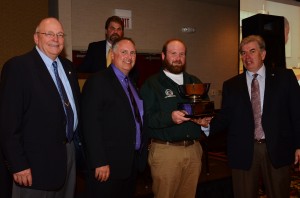 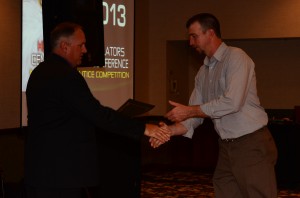 Held May 3rd and 4th at the Dayton Holiday Inn, the two-day competition tested the written and hands-on skills of the talented apprentices trained in our 3,000 square foot, state-of-the-art training facility in Dayton, Ohio.

Following a two-hour written test on Friday and seven hours of hands-on competition on Saturday, the apprentices and their guests were treated to a cocktail and dinner gala Saturday evening. The reception featured delicious food, dancing, and a program to honor IPO members, retirees, and the apprentice winners of the competition. 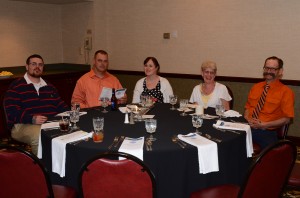 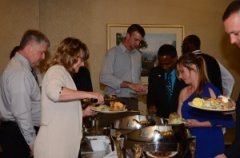 To learn more about IPO training and apprenticeship, click here.

The 2-day training event will be instructed by Tom Dake of the LMCT National Training Program. With over 10 years experience in the firestop industry, Tom is currently finishing a PhD in Public Policy with an emphasis on Fire and Life Safety.

Training attendees will receive 16 hours of CEU credits upon completing the course, which will be held on May 15-16 from 8 am-4 pm at the Local 50 training facility (947 Goodale Blvd, Columbus, OH 43212). Lunch will be provided both days and seating is limited; please RSVP at your earliest convenience by contacting Business Manager Dorsey Hager by email (awl50@insulators.org) or phone (614.221.7177).

Industry wide, the Insulation Professionals of Ohio is at the forefront of an increased focus on the importance of properly installing firestopping insulation materials through standardized and proper design, installation, inspection and maintenance. The leadership team of Heat & Frost Insulators Local 50 is looking forward to sharing our professional commitment to proper firestop installation with our skilled and dedicated workforce.

The $1.1 billion Ohio State University Wexner Medical Center Expansion is the largest project of its kind in the university’s history and currently the largest construction project in the state of Ohio. 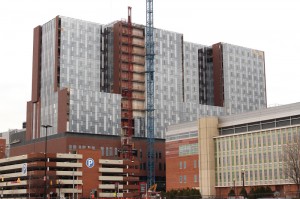 The project aims to revitalize the areas on the Medical Center campus used for research, education, patient care, utilities, infrastructure, and green spaces. Construction of a new OSU Comprehensive Care Center – James Cancer Hospital and Solove Research Institute, the Midwest’s first and Ohio’s only fully dedicated cancer hospital and research institute, is a major part of the expansion and will enable the hospital to serve an additional 10,000 inpatients. 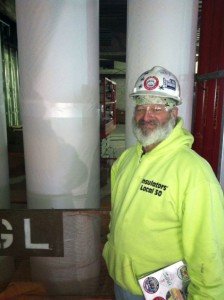 The adequate and proper design, installation and thickness of insulation on all mechanical systems of the Wexner Medical Center Expansion, such as hot water heating pipes and air ducts, will dramatically reduce energy consumption and allow for more efficient and environmentally friendly buildings throughout the OSU campus.

For the Insulation Professionals of Ohio and the insulation construction industry, green construction has been the standard for over 100 years, and we look forward to assisting OSU in achieving another Leadership in Energy and Environmental Design (LEED) Silver-level certification!

Economists are reporting that the unconventional oil and gas revolution taking place in the U.S. (especially in Ohio) is generating increased revenues for states, increasing domestic oil production that will reduce oil-imports by billions of dollars and is also creating jobs — and the mechanical insulation industry is set to prosper from the boom.

One expert figures that the growth of shale gas will save the U.S. from spending $100 billion a year on imported fuels.

At the center of it all is the Ohio shale gas and oil industry, as multiple gas plants are going to be constructed in eastern and southern Ohio, with one being built right now in Cadiz in Harrison County.

The work for the insulation industry in the shale natural gas and oil industry  is coming, not only for the building trades but for insulators … and the work is going to be here in Ohio for a long time; it’s already in Pennsylvania and it’s headed this way.

Skilled, educated building tradesmen are going to be working on these projects — including highly skilled insulation professionals, who will be installing vital mechanical insulation to the plants needed to take advantage of booming natural gas and oil production.

The Insulation Professionals of Ohio (IPO) are ready and prepared to serve the natural gas and oil industry … learn more about a career as a mechanical insulator and the IPO’s world-class training at www.ohioinsulators.com/careers.

The Insulation Professionals of Ohio world-class training and education system, through which it provides clients with the best-skilled workers in the industry, was on display recently among 16 contestants competing in the Central States Conference Master Apprentice Competition in Lansing, Michigan. 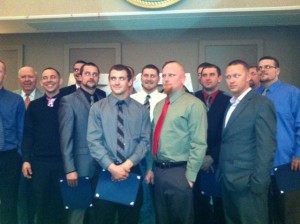 Dean Brooks, an IPO apprentice, represented the IPO well during the event. Dean is gaining his skills as an insulation installation professional through the most current and up-to-date training available anywhere — provided by the IPO  in our own 3,000-square foot training facility in Dayton, Ohio.

To learn more about IPO training and apprenticeship, click here. 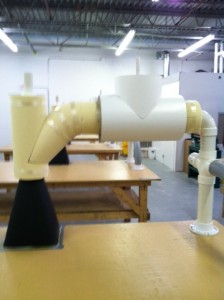